Grandmaster Dang Fong (1879 – 1955), was born in the Saam Seui of Gwong Dung Province in China. Dang followed his father’s example learning martial arts and Dit Da during his youth.

After he grew up, he went to Canton and learnt martial arts under Master Wong Yau in a school located in Cheung Sau Lane ‘s/Dak Sing Lane. Later, he became a student of monk Sim Ling of the Wa Lam Temple. 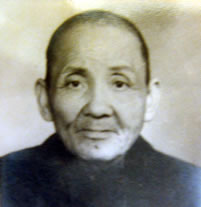 But guess what – we have another candidate, and this time it seems that much more reliable!

The photo on the left was found in Hong Kong in 2005 by a gentleman from Municipal Museum. At the back of the photo was written:

There are couple of good reasons that the person on the photo can indeed be Wong Fei Hung: END_OF_DOCUMENT_TOKEN_TO_BE_REPLACED 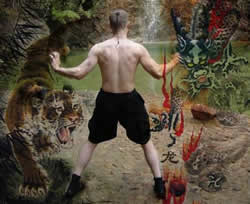 Question: I have heard that Tit Sin Kyun is not for fighting, but for training the internal energy and for making the bridge hands stronger and more pliable. I find this to be a contridiction, because Lam Sai Wing treatise indicate that it is the best set to strengthen one for combat. I understand that the movements of set is for manipulating and moving Chi to different parts of the body, but does that mean that the hand have no combat use?

The length of the weapon depends on the user – held by the waist, it should reach almost to the ground. This type of metal “whip” is also called the “Three-Sectional Chain Whip” (Saam Jit Bin); in other (especially northern) styles, we can see five, seven, nine or even 13-sectional whips, usually longer. END_OF_DOCUMENT_TOKEN_TO_BE_REPLACED

We all do, right. Hung Ga movie fans, check out the selection of training scenes from the legendary 36th Chamber of Shaolin (aka Master Killer).

Petr is currently living in Canton with his wife Lenka and daughter Berta and continues his Hung Ga Kyun studies under Grand Master Lam Chun Sing!

Please see the video of his performance below.

END_OF_DOCUMENT_TOKEN_TO_BE_REPLACED

Practical Hung Kyun Self-Protection Combat Strategy is often criticised to be violent, ruthless, cruel. We don’t wait for the other guy to attack first  – we strike pre-emptively – fast, accurately, with power, hard, continously and without holding back. Actions beats reaction. We say self-protection on purpose. “Self-defence“ implies that you are already under attack – it is one of the last pieces in the chain of the events in overall self-protection game plan. Getting involved in fight at all is very bad. Being under attack means that things are already going very, very bad. END_OF_DOCUMENT_TOKEN_TO_BE_REPLACED