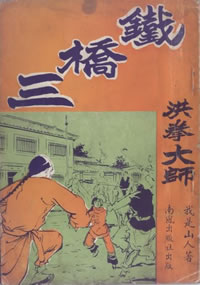 Leung Kwan was very talented and studied under several teachers – according some sources he learned gungfu from Tibetan monk Sing Lung, the master of the „Lion´s Roar“ style (Si Ji Haau), also known as „Bearded“ Lei (Lei „Wuji“) and Lei „Golden Hook“ („Gam Ngau“ Lei). However, he learned the most from a Southern Siulam monk Gok Yan.

Monk Gok Yan is unfortunately a historical unknown – none of the sources make any deeper mention of him. It is possible that he was another student of the Venerable Ji Sin or student of the monk Saam Dak.

After Gok Yan´s death, Leung Kwan wandered through South China and honed his martial skills, which soon brought him membership among the „Ten Tigers of Gwongdung“ and the above mentioned nickname „Iron Bridge”Three  – „Bridge“ (Kiu) means „forearm“ in southern Chinese gungfu terminology; the number three means that he was the third son of the Leung family.

Leung Kwan´s stable, rock-firm stance and iron arms were the terror of all south Chinese fighters. There are many stories of his legendary prowess – according to one, he was able to hold six men on his outstretched arm and carry them 100 steps. „Tit Kiu“ Saam is credited with creating the most advanced “internal” Hung Kyun form, „Iron Thread Set“ (Tit Sin Kyun).

Leung Kwan was unfortunately an avid opium smoker. In his later years he met with monk Yi Sing and asked him to teach him his fabled „Five-Point Plum Blossom Staff“  (Ng Dim Mui Fa Gwan). With regard to Leung´s poor health and opium addiction, the monk refused at first, but he later agreed to teach him. However, old and weakened „Tit Kiu“ Saam fell ill from over-training and died sometime between 1886 and 1888, aged 70-73 years. 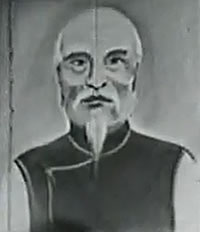 Many people wished to learn from the legendary „Tit Kiu“ Saam, but only few succeeded. Among his most famous students were Choi Jaan, Keui Jyu, Ng Hei Gun, Ma Ji Tim and Lam Fuksing, one of Wong Feihung´s teachers.