Question: I have heard that Tit Sin Kyun is not for fighting, but for training the internal energy and for making the bridge hands stronger and more pliable. I find this to be a contridiction, because Lam Sai Wing treatise indicate that it is the best set to strengthen one for combat. I understand that the movements of set is for manipulating and moving Chi to different parts of the body, but does that mean that the hand have no combat use?

Answer: Tit Sin Kyun is one of the most misunderstood training methods of our system. There is not no magic behind Tit Sin Kyun – it is advanced strength/combat science. My Si Gung, Grand Master Lam Jou, didn’t speak much of “Internal Energy” (Qi, in Cantonese Hei) – he even disliked the term Qi Gong (Hei Gung) and used the old proper name” Internal Exercise” (Noi Gung).

“Iron Thread Set” (Tit Sin Kyun) is a comprehensive tool for power development. Our methodology emphasises the role of the  “Core” (Daan Tin, “Cinnanbar Field”), pelvic floor and diaphragm, engagement of the glutes, lats, abs, grip and generationg the force from the ground up, as well as correct breathing patterns and sounds that help to generate certain type of power (Ging).

Proper and regular exercise of Tit Sin Kyun can make the Hung Kyun practitioner much much stronger (and healthier!) – that is the reason why we used the principles of the set right from the beginning, even in simple “external” exercises like pushups, conditioning, basic techniques etc. Our “external” strength and conditioning is more “internal” than most Hung Ga practitioners’ Tit Sin Kyun – just check out the fundamental exercises of our PHK Intro Kit and you will understand.

As for the application, “Twelve Bridges” of Tit Sin Kyun are a general conceptual framework of our art, from the basic exercises to the most advanced drills; they are taught and explained best “hands-on”, ie. in various application drills.

Tit Sin Kyun of course has a fighting applications, however, very different from what people commonly see. Very few people I have met understood the combat aspect of Tit Sin Kyun well – most of them either set “it is just for health”, “it is just for power development”, or showed bunch of nonsense, absolutely unrealistic and useless applications. 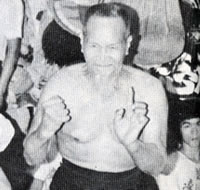 “Iron Thread Set” It is mainly a “Short Bridge, Narrow Stance” (Dyun Kiu Jaak Ma), most of its techniques are used in close range combat like grabbing, holding, clinching, wrestling, tackling and other standup grappling techniques as well as counters against those types of attacks. If you look at its techniques from this point of view, it suddenly opens up and starts to make sense.

Our Man Mou Publishing department is preparing an extensive collection of old and rare texts on Tit Sin Kyun, its principles and various levels of application, as well as complementary videos.

As for the hands-on training, I can recommend to learn more from my Si Hing, Michael Goodwin Sifu of San Francisco Hung Gar Association, as his combat understanding of the “Iron Thread” is the best I have seen and who has helped me in my Gung Fu training a lot – A LOT.