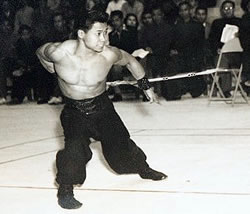 The length of the weapon depends on the user – held by the waist, it should reach almost to the ground. This type of metal “whip” is also called the “Three-Sectional Chain Whip” (Saam Jit Bin); in other (especially northern) styles, we can see five, seven, nine or even 13-sectional whips, usually longer.

The metal whip of the Hung Kyun system is also noticeably heavier than its northern counterparts. Because the handle and the individual parts are of the same length – with the exception of the last part, which is longer, heavier and sometimes sharp – the weapon can be also held and used as a short dagger-like weapon.

The form has a regular, logical structure and emphasizes repetition of particular techniques. Unlike many northern or modern forms performed with light whips, the form sees no value in visual attractiveness or acrobatic performances, but in actual fighting.

Individual sections of the set include mainly:

Learning the form itself is preceded by drills – to ensure the safety of the student – first with a piece of rope, later with a real weapon. It is taught at 8th Kap of our Practical Hung Kyun Curriculum.