Q: Sifu, I have noticed that your Hung Ga school is also training weapon sparring. Can you post some videos of your Practical Hung Kyun’s weapon sparring, and maybe few tips, too?

A: As for weapons training, our school doesn’t train only sets or sparring sets, but also sparring drills and free fencing. Two fundamental weapons of our Practical Hung Kyun curriculum with specific sparring program are long pole and saber (adapted to short stick/baton). END_OF_DOCUMENT_TOKEN_TO_BE_REPLACED

Today the emphasis in martial arts training is usually put on bare-handed skills and techniques, as well as practical self-defense against common weapons like the knife, gun, baseball bat, baton etc.

Anyone who is concerned about reality-based self protection should follow the first rule: Get armed! It was the same in the past in China, be it in the army, or local militia: major emphasis was put on weapon training. END_OF_DOCUMENT_TOKEN_TO_BE_REPLACED

One of the most typical weapons in Southern Chinese martial art styles are “Two Southern Knives” (Seung Naam Dou). 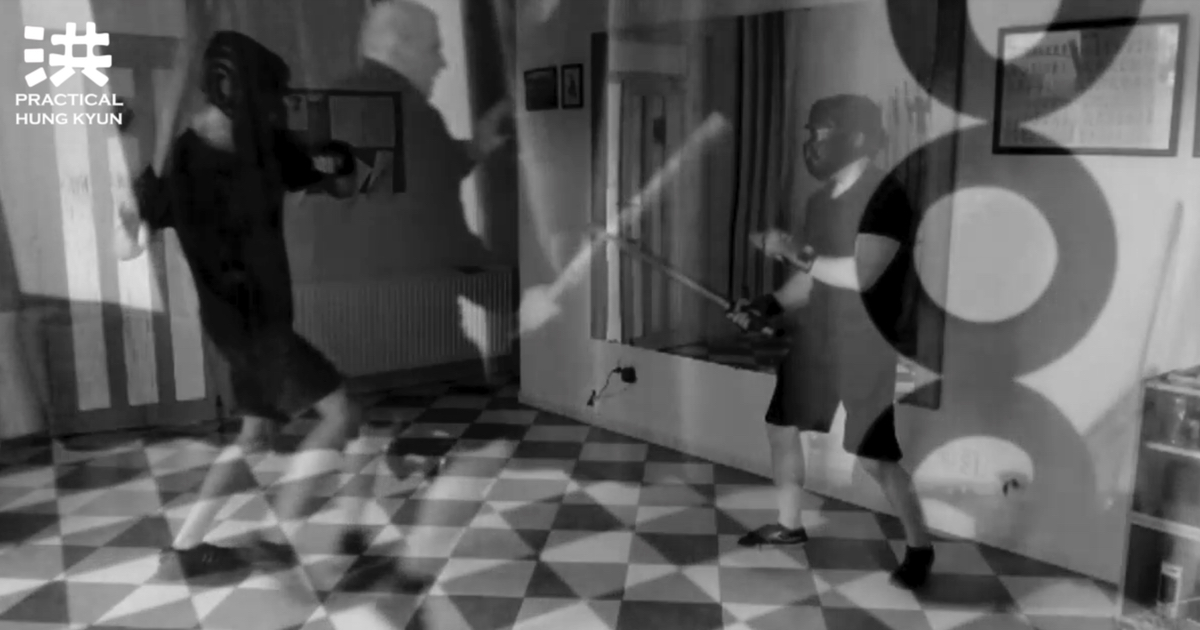 Weapon techniques of the “Commander´s saber” come from Lam Sai Wing, the first patriarch of the Lam family Hung Kyun, who has learned it from a ex-military officer (read the story here). Lam Sai Wing has later used this unique form with a western type of weapon (a classical western saber!) in the Fukgin province army, where he worked as the Chief-Instructor for both bare-handed and weapon combat. Because these techniques were intended for the army and the field of battle, they are relatively easy to learn, remember and use. Cold weapons (especially sabers and “Big Sabres” Daai Dou) were still used in China during the World War II era. END_OF_DOCUMENT_TOKEN_TO_BE_REPLACED

Origins of the “Traveller Monk’s Staff” (Hang Je Paang) are not very clear – most sources date it to the times of Wong Feihung and before. Grandmaster Lam Jou practiced this form with a short introduction from the “Monkey Style” (Hau Kyun) and several techniques in the form actually carry “monkey” names – one of the many alternative names of this form is indeed the “Monkey Staff” (Hau Ji Gwan). This weapon form is a tribute to the legendary hero of the Chinese novel “Journey to the West”, Monkey King Syun Ng Hung (in standardized Chinese Sun Wu Kong), also called Syun Hang Je (Hang Je meaning “traveller monk”), whose favorite weapon was a magical “Wishing Staff” (Yu Yi Paang) that could grow to any size according to the will of its master. END_OF_DOCUMENT_TOKEN_TO_BE_REPLACED

“Six and Half Point Long Pole” comes from the circle of “Red Junks of the Chinese Opera” (Hung Syun Hei Baan), where the Venerable Ji Sin (Ji Sin Sim Si), the last abbot of the Southern Chinese Siulam temple, hid from his Ching pursuers. Ji Sin is tied to the “Six and Half Point Long Pole” in most Southern Chinese legends, for example Wingcheun; if you compare the long pole techniques of Hung Kyun and Wingcheun, it is more than likely that they share common roots. END_OF_DOCUMENT_TOKEN_TO_BE_REPLACED