END_OF_DOCUMENT_TOKEN_TO_BE_REPLACED

I have seen the “Night Tiger Emerges from the Forest” set for the first time in 1999 in Hong Kong, performed by Leung Gam Gwong sifu, a disciple of Wong Lei, and have been fortunate discuss its details with Leung sifu and his student and my good friend Wong Jung Man Sifu on various occasions during my numerous trips to Hong Kong and China. END_OF_DOCUMENT_TOKEN_TO_BE_REPLACED

To learn more about the Southern Shaolin mystery, please watch the video series below (in Chinese with English subtitles). END_OF_DOCUMENT_TOKEN_TO_BE_REPLACED

Barbell and powerlifts for non-powerlifters, strength training in general population, for martial arts?

Russian specialist Nikolai Vitkevich points out: “(Sport specific training) is different for everyone… Basic training is virtually the same in all sports and its primary focus is to increase general strength and muscle mass. Powerlifting originated as a competition in exercises that everybody does.”

Pavel Tsatsouline, StrongFirst Chief Instructor, adds: “And if YOU are not doing them, you should.” END_OF_DOCUMENT_TOKEN_TO_BE_REPLACED 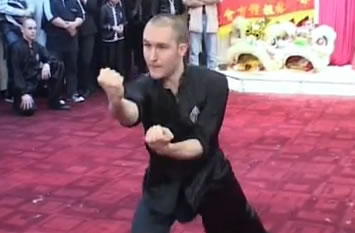 Hung Ga “Taming of the Tiger in Gung Pattern” (Gung Ji Fuk Fu Kyun) – performance of second part in Hong Kong 2009, 100th birthday of my Si Gung, Late Grand Master Lam Jou, who is sitting behind me with his family and John Tsang, Financial Secretary of Hong Kong, carefully watching my technique.

2009 was a great trip indeed – lots of practice both in Hong Kong and China, lots of research of various Hung Ga Kyun families, lots of fun with my students and friends. Good times indeed!

Check out the video below, we will upload more stuff form the 2009 trip soon! END_OF_DOCUMENT_TOKEN_TO_BE_REPLACED