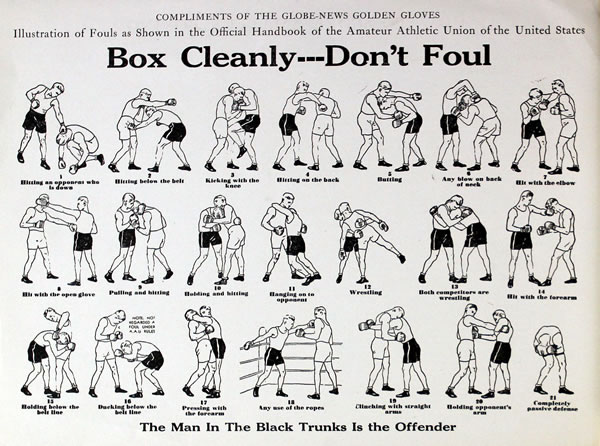 Get the job done as quickly as possible, create the opportunity to escape, run – that’s our PHK reality-based self-defence game plan in case things go wrong, if you get involved in a fight.

We all know how different a real self-defence is from a sport – no rules, no referees, no weight classes, weapons and multiple opponents might be involved, etc.

To ilustrate some of the differences between sport and combatives, let’s check out an old chart of fouls from the Official Handbook of the Amateur Athletic Union of the United States, and compare it to what we do in PHK.

1. Hitting an opponent who is down

The downed opponent on the picture is a perfect target for “Thousand Character Chopping Fist” (Chin Ji Pek Cheui) in the back of the head,  very dangerous technique from our PHK repertoire. Make sure to remember that when the judge hears the witnesses of the fight saying you kicked the (unconscious) assailant into his head, you will not be happy.

2. Hitting below the belt

PHK classic, and actually one of Wong Fei Hung’s favourite techniques, his #1 of the “Ten Unique Hand Techniques” (Sap Duk Sau), taught in great detail in our PHK Intro Kit.

3. Kicking with the knee

Of course a no-no in a boxing match, fine in Muay Thai and MMA, perfectly legit in a reality based self defence –  in the last case of course to the groin. Another PHK classic, again featured in our PHK Intro Kit in the Combatives section.

4. Hitting on the back

Did you know that kidney strikes weaken and switch off the legs? And by the way – in grappling, to be on the opponent’s back is one of the best position. Why it should be different in a stand up fight? You will have all your weapons available, and you opponent none, or just very few.

It is no coincidence that the “Art of Iron Head” (Tit Tau Gung) was widely practiced in China. Head is one of  “Seven Stars” (Chat Sing), seven body, weapons of Chinese martial arts, the other being shoulders, elbows, hands, hips, knees and feet. Headbutts work!

6. Any blow on back of neck

7. Hit with the elbow

8. Hit with the open glove

The image exactly the same technique as in our “Taming of the Tiger in Gung Pattern” (Gung Ji Fuk Fu Kyun): Hook/Sweeping Punch to neck clinch and “Cannon Through the Sky” (Tung Tin Paau Cheui). By the way, our fighter Jakub used this technique extensively in his first MMA fight.

The boxer on the picture is (because of the gloves) is holding his opponent by the waist. We at PHK prefer the opponent’s hair, neck, or clothes. If we grab his waist, we usually use a leg hook takedown.

11. Hanging on the opponent

Clearly a defensive strategy, but anyway, when facing a superior striker, get in to the clinch (or get out). Do not stay in the danger zone.

“Kick – Strike – Wrestle – Control” (Tek, Da, Seut, Na) are  4 main offensive types of techniques of Chinese martial arts. Throw him to the ground – and remain preferably standing, unless it is “safe to grapple” situation and you are proficient in ground fighting.

13. Both competitors are wrestling

Might happen! Scratch it – it will happen. The clinch phase decides if the fight goes on the ground or not, so make sure to spend a lot of time training in this range. Not only wrestling, but hitting the groin (#2), throwing knees (#3), headbutts (#5), elbows (7), etc.

14. Hit with the forearm

Time for your “Bridge Hand” (Kiu Sau)! The illustration is a beautiful example of our “Attacking Pressing Bridge” (Gung Bik Sau) – and we in in PHK have so much more forearm attacks.

As we have seen in UFC, double leg takedown is one of the best counters against a skilled boxer. Solid single and double leg, as well as defence against these types of takedowns, must be a part of your game, period.

16. Ducking below the belt line

…because you might e.g. hit his groin, or take him down. Good!

17. Pressing with the forearm

Another example of #14. You may use it to push the opponent to his heels, or escape a body lock.

Always use your environment to your advantage and opponents disadvantage. How about use of weapons or improvised weapons?

Weird zombie clinch – if you clinch, clinch for real, control the opponent’s waist, and throw him to the ground.

Beautiful overhook, catching the opponent’s glove – of course not legal in boxing. Overhooking opponent’s elbow is a technique we use very often in the clinch.

You must think now how superior Chinese martial arts compared to the mere sport of boxing. Not so fast – boxing specialisation is its best advantage; there is no striking art with better hands than boxing.

(Chinese) boxing fundamentals, such as stance, footwork, body & head movement, and basic strikes are an excellent foundation for all the other “special techniques”. Check out an important quote from the PHK Intro Kit: Boxing Techniques manual:

The fundamental boxing techniques are similar or same in most martial arts – Western boxing, Japanese systems, etc. Don’t dismiss them as simplistic and not profound  – they form the bread and butter of your striking combat skills. Our good friend David Rogers Sifu of Hap Ga says: “If your basic boxing structure works, everything else – Gwa Cheui, Kam Cheui, Jong Cheui etc. will work.” Learn and master the fundamental art of 1-2-3, and you are set to include uppercuts (Tung Tin Cheui), overhand strikes (Kam Cheui), elbows, as well as all other special techniques of PHK  such as animal techniques.

Boxing for the street will be different that for the ring, same goes for wrestling and ground fighting – anybody who watches UFC can clearly see how different the complete MMA game is from the specialised arts (boxing, Muay Thai, wrestling, BJJ).

Of course PHK Boxing techniques are different, as they take account all above, plus more, like weapons or multiple opponent’s – but they are not that much different. What is more important – “before you learn how to fight dirty, you should learn how to fight” (David Rogers Sifu).

Look for similarities, not differences, use protective gear, various modes of sparring, cross-train, and improve your overall striking game. And when having a friendly bout with your colleague, box cleanly, don’t foul.