The most famous Hung Kyun set and perhaps the most famous set of Southern gungfu is the “Tiger  and Crane Double Form Set”. The gungfu style of the Hung family, especially the lineage of Grand Master Wong Fei Hung, is often referred to as the „Tiger and Crane Hung Kyun“ (Fu Hok Hung Kyun) or “Tiger and Crane System” (Fu Hok Paai). Many masters consider Fu Hok Seung Ying to be a complete system on its own. As the famous gungfu saying goes: “Combination of Tiger and Crane has no enemy in the world!” (Fu Hok Hap Yat, Tin Ha Mou Dik).

According to the legends, the core of the “Tiger and Crane Set” was developed by the “founder” of the Hung Kyun style, Hung Hei Gun. He combined the tiger techniques he learned in the Fukgin Siulam temple with the crane techniques of his wife Fong Wing Cheun (according to other sources, a nun called „Third Lay of Wing Cheun“, Wing Cheun Saam Neung).

Wong Man Kai, a student of Lam Saiwing, writes in his Discussion of Fu Hok Seung Ying Kyun: „Tiger and Crane Double Form Set also uses the strong points of the martial arts styles Hung, Mok, Hap and Fat as a reference. The set contains hard and soft techniques, as well as long and short ranged techniques. In addition, the set contains attacks and defenses.“ 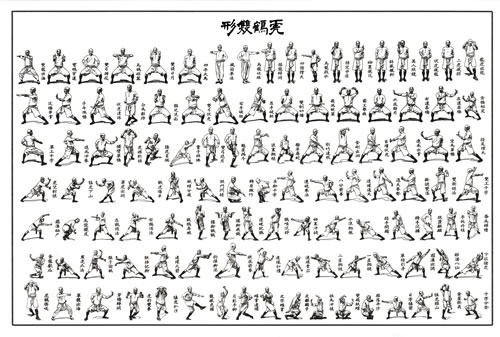 The core of the set comprises relatively short sections of the tiger and crane techniques; in most versions there are 10 tiger and 8 crane techniques. However, the number can vary in the different lineages of the style. The tiger and crane symbolizes the unique characteristics and balance of Hung Kyun. The hardness, power, and ferocity of the tiger claws (Fu Jaau) is complemented by the softness, evasiveness, and elegance of the crane’s wings (Hok Chi), crane’s beak (Hok Jeui) and crown (Hok Ding).

Fu Hok Seung Ying Kyun has been the subject of numerous books, the first being a classic gungfu manual written by Jyu Yuk Jai, a student of famous Lam Saiwing. There are numerous different editions and reprints of the original book. Our archives treasure an old edition of the manual, personally signed by Late Grand Master Lam Jou, his sons and daughters.

There is a modern standardized wushu version of “Tiger and Crane Double Form Set”, however, it contradicts almost all the basic principles of the traditional Hung Kyun. In the late 1980’s the Chinese Wushu Research Institute created a new A-level Nanquan set (the current Nanquan championships set) and the Fu Hok version became unpopular. Nevertheless the set did a great deal for the popularization of Hung Ga Kyun.