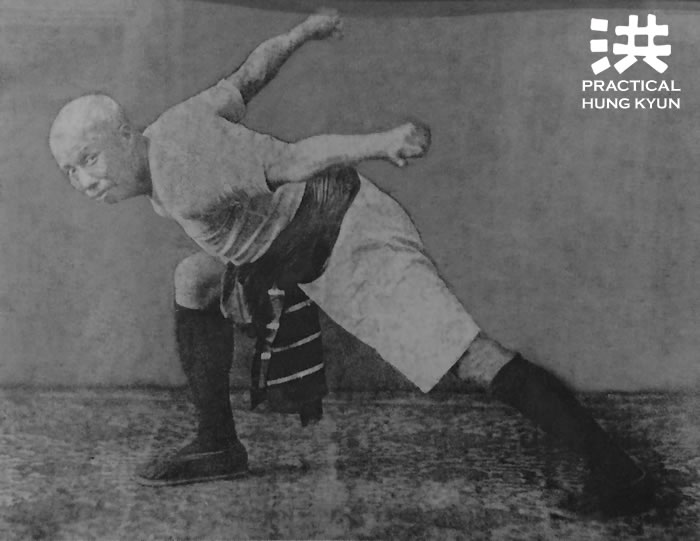 Here is a translation of a rare article from an old vintage Hong Kong magazine, telling the story of Wong Yanlam, his mischievous disciple Wong Honwing and their famous “Wing Flap” technique:

The photo that we publish in this issue is of Master Lam Sai Wing, as he demonstrates the “Wing-Flap” technique (Pok Yik Sau).

The “Wing-Flap” was originally a type of hand technique from the Hap Ga Gung Fu system, taught then, by Wong Yan Lam, to outsiders.

Now, because that “Ten Tiger of Gwong Dung” (Gwong Dung Sap Fu) Wong Yanlam’s disciple Wong Mun Wing1 had not yet followed Wong Yan Lam and trained his methods, although already having followed a number of teachers in order to learn Gung Fu, nevertheless, that which had been accomplished yet lacked refinement, or depth of skill.

Once having obtained Wong Yan Lam’s secret teachings (Bei Chyun), he then came to understand, that which he had learned before had been entirely lacking basis in reality. Therefore, angry and resentful at those teachers he had followed, cheating people by means of their paltry skills, he then resolved to pay each one of them a visit.

Accused of cheating him for tuition costs, they would be ordered to compete with him immediately. If that person were to be defeated, he must then come up with what tuition had been paid, calculate carefully, and return everything.

For these masters, to be suddenly confronted in such a manner came as quite a shock. Certainly, there was no possibility to not compete, even though they were not all his match. Therefore, they sought audience with Wong Yanlam, to speak and lay their grievances before him.

By this time, however, Wong Yan Lam’s eyes were already blind. Still, agreeing that this behavior of Mun Wing’s was quite unreasonable, he also knew that which he had held to have defeated all of those teachers, had then been solely based upon his skill in “Seven-Star Continuous Strikes” (Chat Sing Lin Waan Kau) and the “Rising-Star Hands” (Wan Sing Sau), these methods only.

Therefore, he secretly passed the “Wing-Flap” technique to those instructors, so they could defeat MunwWing next time he came. Each instructor, once having learned, then returned, and, by using this skill, was consequently able to break the “Seven-Star Continuous Strike” of Mun Wing.

This is how the technique first came to be taught outside. Master Lam Sai Wing also liked this skill, and practiced it.

The “Wing-Flap” technique uses the low stance and bent-over waist as a combat “ready” position (Chuk Sai). Crossing both fists at the chest, the hands go out, casting upward from below, just like the wing-flap of a bird. Use it to strike the joints of the opponent’s arms (Sau Jit). Suppose the opponent is coming forward, attacking at the upper or middle gate. If met with this technique, it is certain to defeat him.

In its outward form, the “Wing-Flap” technique is shaped like the “Single-Finger Guiding Hand” (Daan Ji Yan Sau), from the “Tiger and Crane Double Pattern Set” (Fu Hok Seung Ying Kyun). In its attacking usage, if one is able to advance by two full steps, it is even better. On the first step taken, use an “Advancing Stance with Casting Punch” (Jeun Ma Paau Cheui). After having used the “Cast” (Paau), the waist is bent, both fists strike upwards, and the opponent should have easily taken damage.

Definitely, to break the upper and middle gates, this is an uncommonly skilled technique. Please, just see what Master Lam is demonstrating in the photograph, then you can imagine for yourself how its changes can be so wonderful!