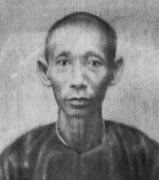 Wong Fei Hung‘s fame and fighting prowess attracted many challengers. One day a huge gang of martial artists of other style arrived to Bou Ji Lam and tore down the school sign. One of them has  cried out loud: “Wong Fei Hung, come out, we challenge you to to Bei Mou, Comparison of Fighting Skills!”

Wong sifu wasn’t at his Mou Gwun at that time, only one of his senior disciples, Ling Wan Gaai, nicknamed “Steel Claw, Iron Leg” (Gong Jaau Tit Geuk) leading a class of his junior classmates. Annoyed and angry, he replied without hesitation:

“Here I am,” he said. Challenge accepted!

Ling and the challenger picked up long heavy poles, assumed their guard a started to fight. Unfortunately for the challenger, “Ng Long’s Eight Diagram Long Pole” (Ng Long Baat Gwa Gwan) was Ling Wan Gaai’s  speciality – Master Wong even let Ling to teach his gungfu brothers. It took only 3 moves and the challenger was defeated – well, it took one move more than Ling wanted, as his Master has taught him that ”long pole doesn’t make two sounds.” (gwan mou leung sing) – the weapons should clash once at the most, the next technique must be fatal for the opponent.

Ling has politely greeted the defeated opponent and turned around. But his rival felt ashamed and humiliated and sudelny attacked Ling again with his bare fists, trying to knock out Ling with the strike to the head. Ling has blocked and grabbed opponent’s hand and used his legendary “Iron Claw” to snatch the assailant’s throat with “Golden Cockerel Locks the Throat” (Gam Gaai So Hau) and killed the opponent in one move.

“Wanted for Murder” posters appeared in Canton the very next day. Ling was in big troubles. When his master arrived back, he has secretly sent Ling to Hong Kong to another student of him Luk Jing Gang, who was living in the British colony for more than decade.