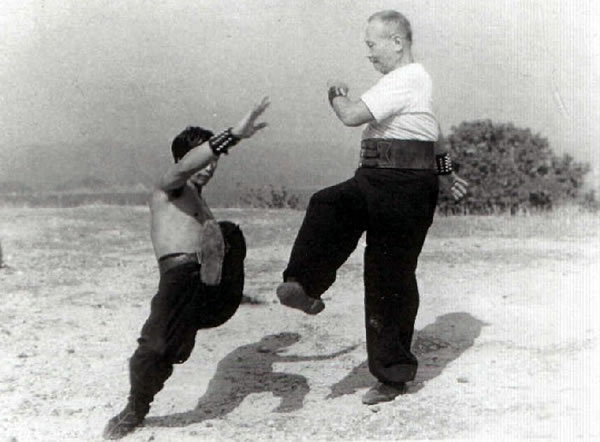 A young kid wanted to learn from a famous martial artist. He was poor, and could not afford the regular lessons.

The Master felt sorry for him, so he told him: “Before I accept you as my student, I want you to do following thing: When you go through the bamboo forest on your way from you work  and back to your village, I want you sweep the bamboos with your legs, left and right.”

The kid followed the Master’s advice. When he started, it was not easy – he could not sweep the bigger bamboo trees, otherwise he got bruised, so he started with the smaller ones. Over the course of few months his shins got conditioned, and he could sweep even the big bambooos.

He reported the progress to his Master. Sifu was very pleased, and told him: “Excellent! Our school just has been issued a challenge. I want you to fight for our school.”

“But Master, I did not learn any combat techniques, how can defeat the challenger?!”

“You will know what to do, no worries!”

Challengers entered the school – Master of another school and his top student. According the custom, the students of the respective Masters were suppose to fight first, and then the Masters.

When the young kid stepped out to take the first fight, the Master of the other schools yelled: “Are you serious?! It is just a kid!”

“Don’t worry, he will do alright”, replied the young boy’s Master.

The other fighter just laughed, and launched a vicious hand combination. The kid did the only thing he knew – stepped to the side and swept his opponent’s leg. The challenger fell to the ground and cried out loud with pain – his leg was broken in pieces, his shin bones shattered!

I heard this story almost 20 years ago when I have been studying Lam Family Hung Kyun under the guidance of Y.C. Wong Sifu of San Francisco when I learned this sweeping kick in our “Taming of the Tiger in the Gung Pattern Set” (Gung Ji Fuk Fu Kyun). Btw. Y.C. Wong’s Gung Fu Studio celebrates 50th years anniversary!

Later on, when I learned to read a bit Chinese I have found out Jyu Yuk Jai explanation of three different types of Hung Kyun’s sweeping kicks (in Lam Sai Wing’s “Tiger and Crane Double Form Manual”):

I have learned these applications from various teachers – I would love to highlight two of them, my Si Hing Michael Goodwin Sifu (San Francisco Hung Gar Association), and Erik Paulson Sifu, a renowned MMA coach and all-round fighter. Both of them are exceptional teachers, have an excellent (and very similar!) teaching method, and although from different styles, they have expanded my knowledge of combat applications of our art tremendously.

Students of our fundamental online course PHK Intro Kit: You can easily plug these variations to the basic free sparring program featured in the course.

Remember: Sweep the Leg. No mercy.