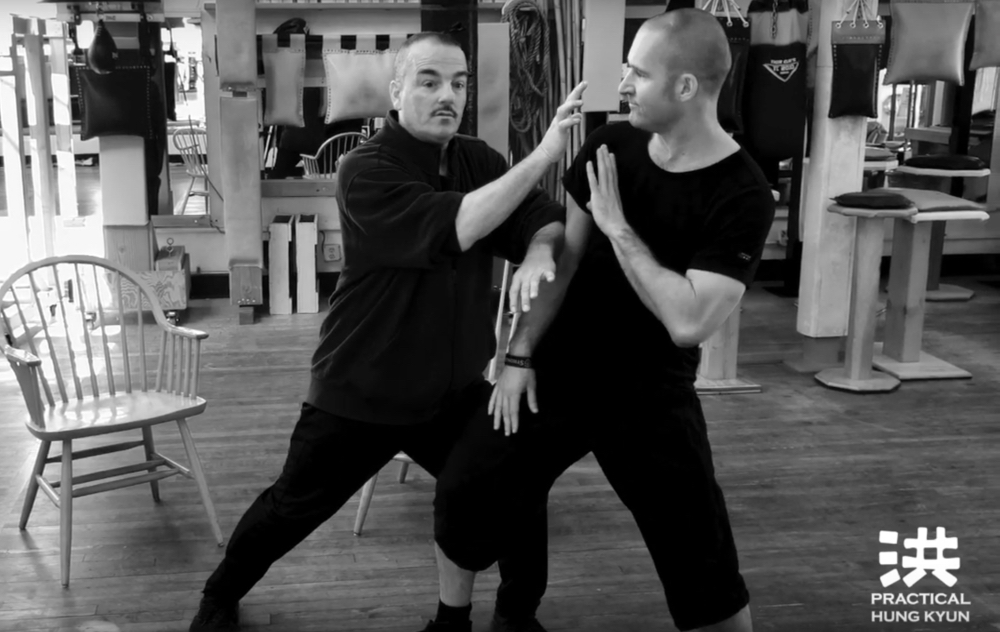 Whereas the dragon represents the spirit, the snake represents the Qi (氣), the breath, and circulation of energy within the human body. Sometimes referred to as a “little dragon,” the snake likewise speaks to the covert, and the unseen.

The snake techniques are generally considered to be a bare-hand extrapolation of ancient spear technique, and as such exemplify the principle of, “defend with a circle; counter with a straight line.” The Hung Kyun maxim states, “hard counters the soft; soft controls the hard.” Thus, the snake’s hard bridging is manifest with rooted stance and iron force, heavy as a python’s coils, while it’s elusive twining, soft bridging action is unfelt until striking the vital points, venomous as a cobra’s touch.

In the Lam Family Hung Kyun curriculum, snake techniques are introduced early, in the “Arrow Palm Set” (Jin Jeung Kyun 箭掌拳), and “Gung 工 Character Tiger Subduing Set (Gung Ji Fuk Fu Kyun 工字伏虎拳). Although stories are popular, point striking is not acupuncture, but conditioned finger strikes to the normal, vital points of the human anatomy, such as the eyes, temples, throat, trachea, and (with increased finger strength) even the large arteries, and solid thoracic organs. Here, a regimen of conditioning is indicated, including fingertip pushups, and stabbing the sand (Chaap Sa 插沙). Grandmaster Lam Cho advised that “incorrect or excessive hard conditioning can lead to nerve damage and arthritis in old age.” He also stated, “It’s quite easy to spot those (men) who do not condition, as their fingers will be as slender and pointed as a girl’s.” Thus, to advise a sensible, balanced, and sustainable practice regimen.

“The Black Dragon Swings its Tail” (Wu Lung Baai Mei 烏龍擺尾) is a heavy whipping punch to the opponent’s middle and lower gates, executed with a running step (Jau Ma 走馬), followed by a vertical jump, to negate an attack to the legs.

Upon touching ground, the hang-casting punch (Gwa Paau Cheui 掛拋搥), is a scissoring, long bridge action known as “Snake Crosses the River” (Se Faan Gong 蛇翻江), more commonly referred to as “Water-Casting Punch” (Seui Long Paau Cheui 水浪拋搥), adapted from the Hap Ga/Lama arts. The casting punch is a floating action, thus raising, and driving the opponent back, in tandem with the “Upper Cramming Hand” (Gung Bik Sau 攻逼手), then followed with a side palm to the flank (Jak Jeung 側掌), in a heavy, sinking action.

Finally, five techniques are executed from a stationary, training horse stance position: cover (Fuk 伏), bar (Laan 攔), slash (Seuk 削), cut (Got 割), and casting palm (Paau Jeung 拋掌), from the Fuk Fu Kyun techniques (伏虎拳之法). Each of these hands has a variety of changes, to be developed and extrapolated upon, under a qualified instructor’s guidance.

About the Author: Sifu Michael Goodwin is founding director of the San Francisco Hung Gar Kung Fu Association, in San Francisco, California, with branches in Canada, Mexico, Chile, Peru, and Brazil. He is a senior disciple of Grandmaster Lam Chun Sing, and has been a practitioner of Lam Family Hung Kyun since 1976.