What do we know about Beggar Sou? Ng Ho writes:

He was born in Hunan, and was originaly known as Sou Chan. He is better known as „Beggar Sou“. For a time, he made living by performing martial arts in the street with his sister, and they eventually arrived in Gwong Dung. He a tone point opened a martial arts school at the building of the Saam Sing Se, a club in Gwong Jaau.

He was an expert in Siu Lam pole technique, and delighted im leading the life of wanderer.

“Beggar” Sou was actually a Hung Kyun master and there is no evidence that Wong Fei Hung has learned from him “Drunken Boxing” or anything else. 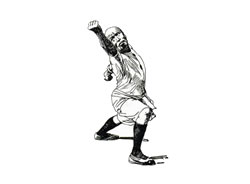 “Tiger and Crane Double Form” (Fu Hok Seung Ying) contains a technique called “Drunken Eight Immortals” (Jeui Jau Baat Sin) and some practitioners actually perform it with drunken style type of footwork, but the technique actually comes “Long Bridges” of Lo Hon Fat Ga, ie. of Hap Ga. It has nothing to do with “Drunken Boxing” –  drunken “flavour” of some of the lineages is more a performance thing and showmanship than practical usage.

One of the few Masters teaching “Drunken Eight Immortals” (from Taoist tradition) today is Wong Kiew Kit Sifu – not only the set, but also fighting application. You can see the complete set below.