This is the first in a continuing series that I hope you will enjoy. If you don’t “enjoy” it, I hope at least it will motivate you to examine your practice.

My name is David Ross. For those who do not already know me, I began training in the Dang Fong lineage of Hung Ga, studied Shuai Jiao (Chinese wrestling), and eventually became the adopted (Baai Si) disciple of the late Chan Tai-San where I learned Lama Pai and some Choi Lei Fat from him for sixteen years.

For about twenty years, I have trained fighters. My students have seen success in Sanshou/San Da, Muay Thai, amateur boxing, kickboxing and Mixed Martial Arts. All in all, I have trained 3 world champions, 18 national (tournament) champions, national and regional champions in these combat sports. While I have cross trained, the marrow of my teaching is based upon my Chinese martial arts, particularly Chan Tai-San’s Lama Pai.

Perspective is always relative to your position. I grew up in a time when Chinese martial arts had a lot of fighting. I have noted that the fighting was not always organized, nor very fair, but it certainly existed.

These days, if you post old clips in a forum dedicated to Chinese martial arts, you will hear a number of different responses. For some, it is validation of what they do. They exclaim “see, kung fu fighting.” Others dismiss it entirely. It is mere “sport” and, after all, “kung fu is about real fighting.” Those clips demonstrate nothing but “kickboxing,” they do not show real application of Chinese martial arts.

To me, these responses and discussions are very important to understand why Chinese martial arts has lost its fighting reputation, why so many of its students lack skills and to find solutions to these issues. My thesis, very little people understand what Chinese martial art was really about, its history in relation to larger Chinese history and  the origins of many of conceptions which, even at their best, obscure important issues.

To those who hold up the “old days” of fighting and insist that Chinese martial arts are fine as they are, I use clips such as those above to disagree. A trained boxer, kickboxer or Muay Thai fighter will provide you a long list of things wrong in those clips. My own short list would have to include (1) sloppy execution of basic techniques, (2) lack of good combinations, (3) lack of good defense and (4) lack of conditioning.

Those in the Mou Lam who dismiss these events and talk about “real fighting” demonstrate that they have a very poor understanding of the history of the real arts. If we consult General Qi Jiguang’s books we learn that the real Chinese martial artists have long had to warn about “flowery” technique and remind the hobbyist that real application is not “pretty.” If we examine the Lei Tai events from the early nationalist period, we see that those who were effective fighters were pragmatic and open minded. Their critics similarly dismissed them as not showing “real Chinese martial art” but engaged in their criticism from the audience, afraid to actually fight! Professor Xia Bahua, former president of the Chinese Wushu Association and a founder of the Sanshou program at the Beijing Physical Culture Institute, had in several interviews discussed that many so-called “traditional” techniques are not in fact practical and that a real martial artist keeps an open mind. I could make a long list of these sorts of examples.

When people ask me why these changes occurred, I am afraid I have many answers but the most depressing is the most obvious. Many of the individuals in positions of importance benefit from the misinformation, misconceptions and outright fantasy perpetuated in the modern Mo Lam. And they would suffer if the standard they were held to was the ability to effectively teach practical fighting. 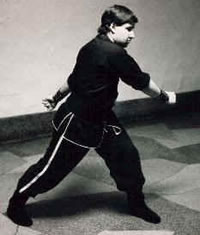 About the Author: David Ross is a senior, adopted disciple of the late Lama Pai and Choi Lei Fat master Chan Tai-San. Sifu Ross spent 16 years training with Chan Tai-San and was the chief instructor for his public classes in NYC.

Since 1994, Sifu Ross has put his own students in many fighting events, amassing an impressive record including 3 world champions, 18 national champions and a variety of other title. He can be reached at NY San Da.