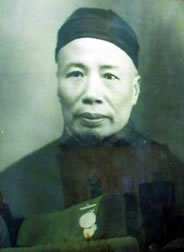 Lam Sai Wing was born in Ping Jau village, Naamhoi district, Gwongdung province. He worked as a butcher for many years and this is why he is sometimes known as “Porky” Wing (“Jyu Yuk” Wing).

Martial arts were handed down in the Lam family from one generation to the next. Lam Sai Wing began his study of Gung Fu under the instruction of his grand-uncle Lam Geui Chung. Later he studied with other masters, mainly master Wu Gam Sing and Jung Hung Saan, a master of the Fat Ga Kyun. At the age of twenty two, he became a disciple of Wong Fei Hung, and remained a close disciple of the famous master for more than twenty years.

Lam decided to devote himself to the study and teaching of martial arts and opened a celebrated school in Bou Wa Jing Street in Canton. As a master of this school he often faced challenges from rival martial arts teachers, who wanted to test his gungfu. From the time of his study with Wong Fei Hhung there is a very famous story about Lam Sai Wing and his victory over the “Iron Head” monk in the Hoi Tung temple. 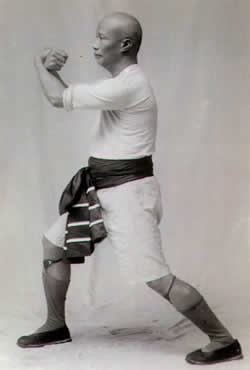 There are many stories about Lams’ undisputed mastery of Gung Fu. Word reached Lam that a master, famous for his iron forearm, had ridiculed and badmouthed Lam Sai Wing’s skill. He went to the mater`s school, tore down the school sign and broke it in the middle. The enraged master challenged Lam to a fight. After a short series of hits and blocks, the master attacked from the ground with a side kick. Lam faced him and with a scissors block, broke his leg.

“Everything bad is good for something”  – the defeated master, instead of further criticizing Lam’s Gung Fu used the incident as marketing trick and made a  lot of money selling Dit Da medicine, because it healed fractures by the famous Lam Sai Wing!

One day a Japanese officer enrolled at Lam`s school under an assumed identity. He was a champion of Ju Jutsu but didn’t reveal his knowledge of martial arts because he wanted to test Lam’s gungfu. 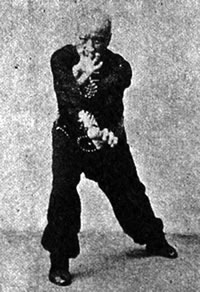 After approximately one month of training he told Lam he didn’t understand or agree with such slow training of sets and argued that Hung Kyun could not serve anybody usefully in real fight. He jumped on Lam, caught his front leg and tried to throw him to the ground. Lam Sai Wing took a step forward and knocked the officer out with the “Black Tiger Claw Technique” (Hak Fu Jaau Faat) technique. The chastened officer apologized and invited Lam onto his ship, where the entire crew stood to attention and fired a cannon salute for Lam Sai Wing and his fighting skills.

One of Master Lam’s most famous fights was the incident at the Lok Sin Theatre in Canton. Lam Sai Wing and around ten of his students were caught in a trap laid by a rival martial arts teacher. Lam and his students were attacked by vastly superior and armed group numbering hundreds.

Lam’s students sustained only soft injuries. The rival side counted more than 80 seriously injured and transported to hospital. Lam Sai Wing was unwounded. The Ching authorities put a price on Lam`s head and he was forced to hide in the nearby province of Gwong Sai. He returned to Canton after the establishment of the Chinese republic. (You can read the details about the incident the 4rth part of our special Legendary Grand Masters of Hung Kyun series).

In the first years of the Republic Lam was established as the main instructor of martial arts to the Kuomingtang army in Gwongdung, by the army officer Lei Fuk Lam.

In 1921 he demonstrated and performed his art for the financial benefit of Canton orphanages and he was publicly honored as the “Father of the Country” with the silver medal of Sun Yat-Sen. When the Kuomintang set out on the North march (1926-1927), he accepted an offer of the position of martial arts instructor from the chairman of the Hong Kong butcher association, Wong Gam Yun. He moved to Hong Kong, opened a school and founded the “Southern Martial Arts Athletic Association” (Naam Mou Taiyuk Wui).

Lam Sai Wing was responsible for the popularization of this style of Hung Kyun, which he constantly improved as times changed. In contrast to old conservative masters, who kept their knowledge to themselves, he taught his disciples everything he knew and he set the standards for other masters of that time.

He was also forward thinking for his time, in publishing three (now classic) books, which were written under his direction by his students, Jyu Yuk Jai, Lei Sai Fai and Jeung Sai Biu. These books were based on the three fundamentals sets of the Hung Kyun style and some of the first books about traditional martial arts of Southern China.

Grand Master and second patriarch of Lam Family Hung Kyun, Lam Jou, known also as Lam Gun Kkau, was born in 1910 in Gwong Dung province, district of Naam Hoi, Ping Jau town. As a child he was an orphan and he was adopted by his famous uncle Lam Sai Wing. Under his direction, he began to train at age of 6. Apart from martial arts he also studied traditional Chinese medicine, (Dit Da Yi Fo: the branch of TCM specializing in injuries made by hits or falls) and treatment of fractures, excavations, bruises, etc.

Owing to his abilities and diligence, he began teaching at the age of 16 – at first as an instructor in Lam Sai Wings’ “Southern Martial Arts Athletic Association” (Naam Mou Taiyuk Wui) and later at his uncle’s school where he eventually became his successor.

Owing to his power, speed, dexterity and perfect techniques he became famous throughout China and people called him “Sifu” (“master”) as a young man. As a 30 year old he presented gungfu to the British army and navy and amazed Chinese and foreign audiences. The London press published many photographs of him. Because of Lam Jou, the Hung Kyun style spread over the whole of Southern China.

During the Second World War Lam Jou actively joined the anti-Japanese revolt. After the Japanese invasion of Hong Kong, disturbances broke out in the streets and Lam Jou`s school was closed down. The Japanese recognized that Lam Jou was a man with considerable influence over the local townspeople and tried to force him to become a member of the local administration. Lam Jou refused to co-operate with them. He escaped to his native land in Gwong Dung and secretly taught martial arts there. After the war, he moved back to Hong Kong, opened his school and medical practice again and acted as a martial arts consultant for many associations and companies.

Grandmaster Lam Jou improved the Lam Family Hung Kyun with many innovations, such as principles and techniques of the northern styles, the “Tiger and Crane Sparring Set ” (Fu Hok Seung Ying Deui Chaak) and many weapons sparring sets.

(Read more about Grand Master Lam in the 5th part of our special Legendary Grand Masters of Hung Kyun series as well as in the Lam Sai Wing Memorial Book.)

As his brothers and sisters, young Lam Chun Sing started to learn Chinese martial arts as a small kid. As points out with a smile, Grand Master Lam Jou was “strict teacher loving father”. Every morning he followed his father to the mountains to practice in the early morning.

There were othe practiotioners of different martial arts, and his father always asked him – what are the strong points, what are their weak points? Hard training and analysis of other systems under the tutelage of his father was the best practical and theoretical experience for Lam junior.

After that, he went to school and resumed the training in the afternoon and evening again. Whenever he missed a session or did not train, his father would punish him. On one ocassion, Lam junior refused to train and run from the home. When he returned, his father suspended him on iron chain and beated him with a stick.

arned and mastered complet Hung Kyun curriculum in his teens and soon started to assist his father and brothers in the teaching. He has learned not only the fighting skills of Chinese martial arts and the rich weapons curriculum, but Chinese art of “Hit and Fall” medicine (Dit Da Yi Fo) as well.

When Grand Master Lam Jou’s adopted son Dang Gwon Wa moved to the USA in 1970’s, Lam Chun Sing took over his school and continued to teach as his father’s assistant in the Kowloon school as well. In 1990’s and later Grand Master Lam Chun Sing started to promote their family art internationaly as well, especially in various countries in Europe as well as South America. 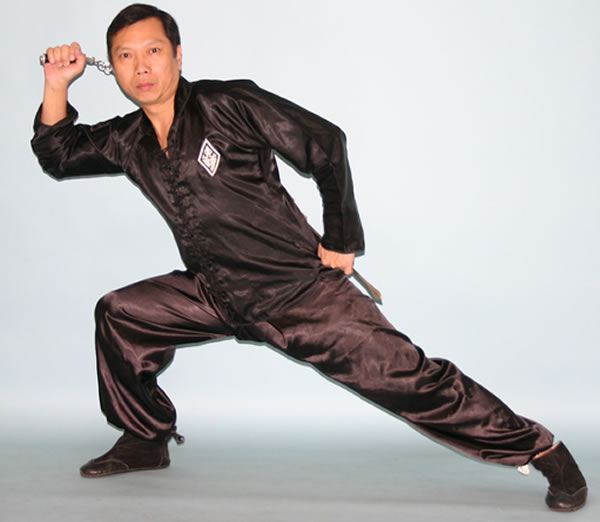