First and Only English Translation, with the Commentary

The Story Behind the Lam Sai Wing Memorial Book

Grand Master Lam Sai Wing, disciple of of Grand Master Wong Fei Hung, was on the greatest martial artists of his time. He has passed away in 1943, leaving behind a great legacy of his teaching, hundreds and thousands of students and grand-students.

In the Appendix of the original Memorial book you will also find addresses of all students who have contributed to the memorial book, their placeof birth, age and proffession. Very rare set of data for all serious Hung Kyun researchers.

All texts are presented bot as scan of the original Memorial Book aswell as English translation!

All photos have been scanned and restored from one of the few surviving copies existing today!

All terms are presented in standard Yale romanization Cantonese together with traditional Chinese characters and English translation!

K. van ’t Slot-Lai, born and raised in Hong Kong, she has practised Gung Fu since young age and for many, many years.  She now resided in the Netherlands.

C. van ‘t Slot Sifu has practised Gung Fu since young age. In 2000 he went to Hong Kong and started learning from master Lam Chun Fai. He has become a senior disciple of Master Lam Chun Fai. Currently, he runs a Gung Fu school in the city of Utrecht, the Netherlands. 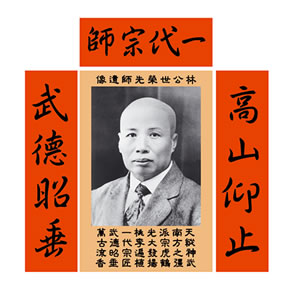 Suitable for framing and hanging in your school or at your home.

Pay the respect to the first patriarch of Lam Family Hung Kyun, venerable Lam Sai Wing, and help to promote the art of Hung Kyun and Chinese culture in general.

Left and right: Just As a High Mountain You Face, The Martial Virtues Will Last Forever.

Heaven given talent, divine and mighty,
Strongest in the Southern China,
Patriarch of the Tiger Crane School,
Developed to glory and prosperity.
Disciples like a peaches and plums planted everywhere,
Most honorable first generation patriarch,
Martial Virtues Passed on Brightly,
Will be spread and taught forever.

If for any reason you don’t feel that the rare and precious Lam Sai Wing Memorial Book and the downloadable poster bonus were an outstanding and rare addition to your Hung Ga Kyun library, you may contact us at any time during the next 60 days and we’ll refund your money.

There are no reviews yet.