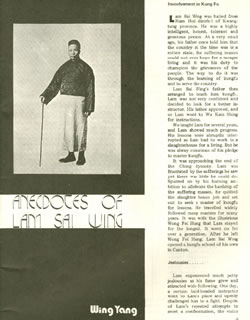 Lam Sai Wing was hailed from Naam Hoi district of Gwong Dung province. He was a highly intelligent, honest, tolerant and generous person. At a very small age, his father once told him that the country at the time was in a rotten state, the suffering masses could not even hope for a meagre living and it was his duty to champion the grievances of the people. The way to do it was
through the learning of Gung Fu and to serve the country.

Lam Sai Wing’s father then arranged to teach him Gung Fu. Lam was not very confident and decided to look for a better instructor. His father approved, and so Lam went to Wu Gam Sing for instructions.

Wu taught Lam for several years, and Lam showed much progress. His lessons were abruptly interrupted as Lam had to work in a slaughterhouse for a living. But he was alway conscious of his pledge to master Gung Fu…