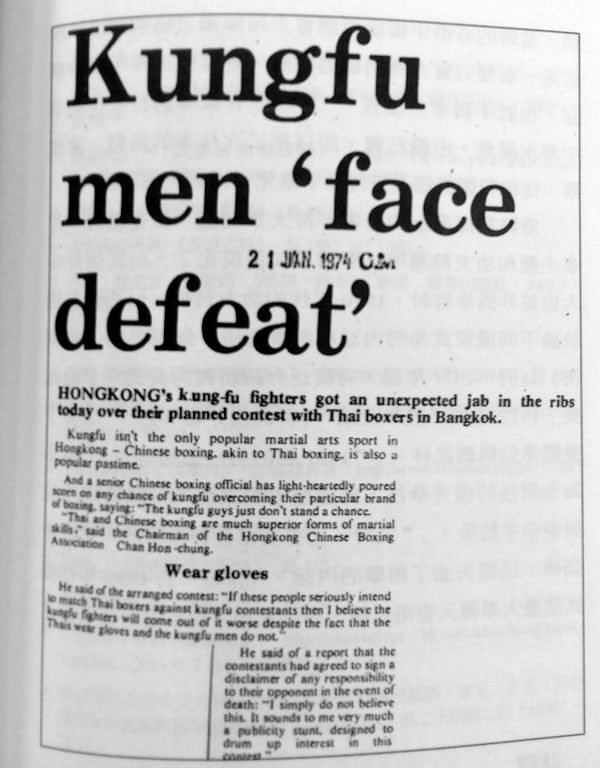 This is not going to be the most popular post on our blog.

Nevertheless, if you are a Chinese martial arts practioner or teacher, you have to know, think, and act.

Here is a transcript of the newspaper article above:

HONGKONG’s kungfu fighters got an unexpected jab in the ribs today over their planned contest with Thai boxers in Bangkok.

Kungfu isn’t the only popular martial arts in Hongkong – Chinese boxing, akin to Thai boxing, is also a popular pastime.

And a senior Chinese boxing official has light.heartedly poured scorn on any chance of kungfu overcoming their particular brand of boxing, saying: “The kungfu guys just don’t stand a chance.

“Thai and Chinese boxing are much superior forms of martial skills,” said the Chairman of the Hongkong Chinese Boxing Association Chan Hon-chung.

He said of the arranged contest: “If these people seriously intend to match Thai boxers against kungfu contestants then I believe the kungfu will come out of it worse despite the fact the Thais wear gloves and the kungfu men do not.”

He said of a report that the contestants had agreed to sign a disclaimer of any responsibility to their opponent in the event of death: “I simply do not believe this. It sounds to me very much a publicity stunt, designed to drum up interest in this contest.”

Imagine the comments from the “traditional” martial arts community if I would say the things above.

But – these are the words of renowned Hung Ga Kyun Grand Master Chan Hon Chung, 40 years ago!

Unfortunately, we were able to obtain just the first page of the article, but – we have found a full report of the event. Read below.

Chinese Have a Bad Night in Bangkok

Hong Kong Kung fu exponents who were still nursing their wounded pride after the humiliation they had suffered at the hands of the Muay Thai athletes in late 1973, had come back to Bangkok to challenge the Thai’s in a return match. Two of their Kung fu brothers had been knocked out in the 1st round by the Thai boxers and now it was time to exact revenge.

Hong Kong team manager Wai Chin explained that his team had been at a disadvantage in the first encounter by having to wear gloves. “Our trained hands are our most effective weapon, and we have to insist on a bare-handed fight this time. We will have our revenge all right”, said the manager.

After a rule meeting between the Chinese and the Tha’s the following rules were agreed upon:

The ‘barehand’ decision found some concern among the Thai athletes but the promoter Col. Thongterm Pobsook, said any athlete found clowning or not fighting to their full ability would be banned from the stadium (Lumphini) for life.

15,000 fans packed the huge Hua Mark Stadium (an affiliate facility used by the Lumphini organization). An unusually large contingent of Chinese came to watch the bouts excitedly shouting, “Bruce Lee, Bruce Lee” and “Enter you Dragons!”. The event opened with an exhibition between 2 members of the Kung fu team. It proved unpopular as the crowd had come to see blood.

In the first bout Thai flyweight Krengprinoi Sawsakyon (103 lbs.) squared off with Chen Yew-kuang of Hong Kong (105 lbs.). The Thai was apprehensive about his opponents exposed fingers and moved cautiously, attacking with only a few long range kicks. The Chinese was fast enough to dodge the kicks and he countered quickly with some punches to the Thai’s face. Suddenly the Thai delivered a high roundhouse to the face of his foe followed by a second to the neck which floored the Kung fu man. Clearly shaken, the Chinese struggled to his feet and then moved straight into a powerful punch that put the Chinese out for the count of 10. 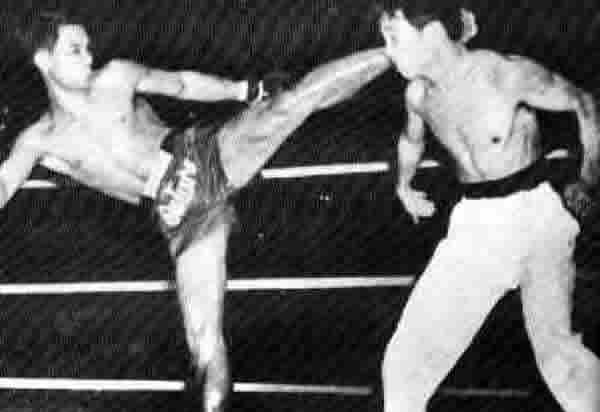 In the 2nd bout, Samarn Lukpanpo, former Thai Flyweight Champion (114 lbs.) met Tang Li-yuan (111 lbs.). Samarn missed a few round kicks and traded punches while close before landing a kick to the neck that sent the Chinese reeling into the ropes. The Chinese came immediately back with a series of knife hand attacks to the Thai’s body. Unfortunately, he got trapped in the corner. The Thai let loose with a series of elbow and knee attacks, then used his gloves to grab the Kung fu mans head, pulled it down and smashed a knee into the Chinese mans face. Bleeding heavily Tang got back up to continue but gave up when he noticed the blood. The fight ended at 2 minutes 20 seconds of the 1st round.

The third fight had Thai flyweight Rerngsak Pornthawee (114 lbs.) matched against 115 lbs. Ou Joon-hai. The Chinese was nervous and started running around the ring to stay out of the Thai’s reach. The Thai caught the Chinese with a kick to the leg that sent him sprawling to his face on the canvas. After the 8 count, the Kung fu fighter refused to fight and he was booed out of the ring. Time: 1 minute, 22 seconds.

The fourth fight was the main event between Thai Bantamweight Champion Nongkai Sawprasorn (119 lbs.) and Hong Kong’s Teng Oui-hong (122 lbs.). The Chinese went through a lot of flashy moves and then attacked the Thai with a jumping front kick. The Thai dodged the kick and countered with a roundhouse kick to the kidney region of the Chinese. The kick stopped the Chinese in mid-air and he dropped to the canvas like a sack of rice. The bout lasted 20 seconds.

The final bout of the event featured Thai flyweight Payon Sermviset (110 lbs.) against Loo Ui-liang (108 lbs.). With some very fast and powerful hand combinations, the Chinese drove the Thai into the ropes. The Thai had to use some vicious elbow work to get out of trouble. The Thai followed with some strong leg kicks which landed before following up with a head kick which drove the Chinese athlete to the canvas. Payon waited for the Chinese to get back up and then landed a kick to the neck . Loo crumbled to his face and stayed there a lot longer than the 10 count. The Kung fu artist was carried from the ring on a stretcher.

In the five matches the Thai’s had knocked all their opponents out in the 1st round and total action came to barely 6 minutes. The Chinese spectators started shouting, “cruelty”, “torture”, and “Barbarians” were answered with jeers from the Thai audience. According to records this event marked the 4th time there was a confrontation between Kung fu and Muay Thai. In 1921, Tse Shang, a famous Chinese fighter challenged a Thai boxer by the name of Yang Hantalay. Eye witness reports claim that it was the most brutal fight ever seen. It lasted under 3 minutes and the Chinese needed months of medical care to recover. Then in 1958 a team of Tai Kek were all beaten by Thai boxers. All the fights ended in 1st round KO’es. None of the fighters from the 1973 matches appeared in the 1974 matches. The Hong Kong manager Wai Chin said, “I’ve had enough. Never again. Muay Thai is too dangerous to be a sport.”

And they were very successful.

Today Masters such as David Rogers (Rising Crane) or David Ross (NY Sanda) are very successful in MMA and other full contact events.

“In many instances where traditional martial artists who spend most of their time practicing forms and static technique sequences, along with limited sparring, have been overwhelmed in a self-defense situation. Even though the traditional martial artist had eye strikes and groin attacks in his arsenal, he wasnt actually able to apply his training when real resistance came crashing down on him.”

“If you want to learn how to fight you have to practice fighting against someone who is fighting back!” 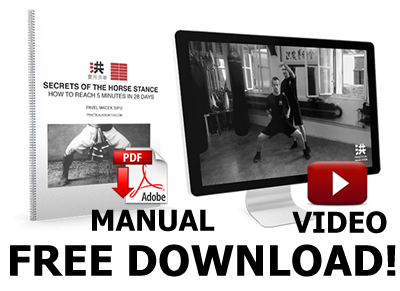