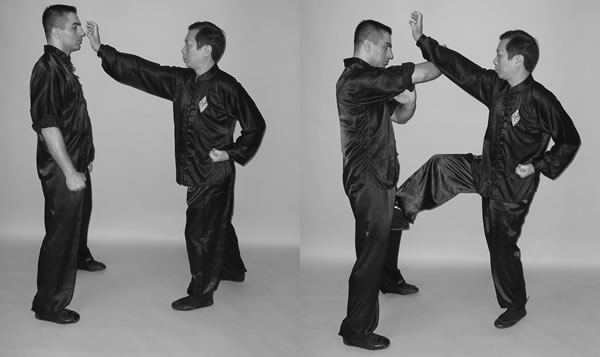 The “Small Deception-Kick” of the Siu Lam Hung Ga system, likewise a “Shadowless Kick”, is referred to as a Gwai Ji,  “Small Deception”. The idea of it is to “Counter with Emptiness” (Heui Jiu). When issuing this counter-attack against an opponent, it is first necessary to strike forth by means of emptiness, “signaling the east to attack the west”, thus distracting the opponent’s ears and eyes. This type of empty counter is referred to as the “Small Deception” (Gwai Ji), and also called the “Shadow-Strike” (Ying Da) as well.

From Siu Lam writings, we have the words, “Without Deception, There Can Be No Kick” (Mou Gwai Bat Sing Geuk). The idea being that, with every Siu Lam kicking technique, whenever raising a leg to attack the opponent, one must simultaneously counter using emptiness, while distracting the opponent’s ears and eyes. If there is no empty counter, it is not a lineage Siu Lam kicking technique, for sure. This is why it’s called the “Small Deception Kick” (Gwai Ji Geuk).