Weapon techniques of the “Commander´s saber” come from Lam Sai Wing, the first patriarch of the Lam family Hung Kyun, who has learned it from a ex-military officer (read the story here). Lam Sai Wing has later used this unique form with a western type of weapon (a classical western saber!) in the Fukgin province army, where he worked as the Chief-Instructor for both bare-handed and weapon combat. Because these techniques were intended for the army and the field of battle, they are relatively easy to learn, remember and use. Cold weapons (especially sabers and “Big Sabres” Daai Dou) were still used in China during the World War II era.

Saber is the “fighting spirit of a hundred (i.e. all) weapons” (Baak Bing Ji Daam) – “the saber must be like a fierce tiger” (Dou Yu Maang Fu). The movement of the off-hand is also important for saber mastery – as the proverb says – “hand accompanies the saber” (Daan Hou Hon Sau). 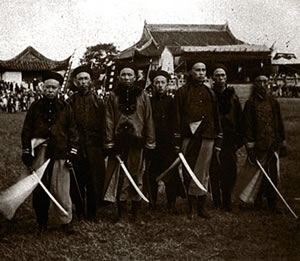 The main saber techniques are comprised of horizontal, vertical and diagonal slashes (aimed at opponent´s arms, legs, neck etc.), “blocks” and stabs with various footwork – first in “Cross-Pattern” (Sap Ji), later in all “Eight Directions” (Baat Fong ). Attacks are aimed predominantly at opponent´s front hand ,in which he holds his own weapon (saber, spear etc.) and due to the form´s origin in warfare, fight against several enemies is also taken into account.

Practicing saber techniques develops stability and mobility of stances, waist work and relaxation of shoulders, elbows and wrists. The form is often practice with a heavier saber for the sake of strength conditioning.

The form itself is preceded by single stationary drills, moving drills and combinations. The use of the techniques is developed through various fencing drills against different weapons, both long and short.